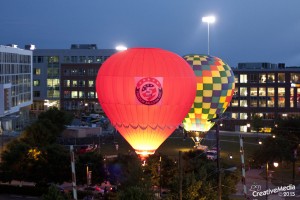 Like many folks in our area, I am excited about the first hot air balloon festival to come to the Raleigh-Durham area in nearly 25 years. The WRAL Freedom Balloon Fest is scheduled for this coming weekend, May 22 -25 in Zebulon and Raleigh.  So, when I read on social media that there would be a preview in Durham last night, I picked up the trusty camera and headed out the door.

Filed under: Featured Photos, Photography on Thursday, May 21st, 2015

Rags to Riches Theater for Young Audiences performed “Little Red Riding Hood” at the South Regional Branch of the Durham Public Library on August 5th. LD CreativeMedia was there for all of the fun!!   Here are just a few pictures from this wonderful performance:    Looking for More? If you would like more information

I was fortunate enough to get to spend a few days at good ole’ Emerald Isle last week. Here are just a few pictures from my trip.

The Heritage Huskies visited the Enloe Eagles on April 23, 2013. LD CreativeMedia captured a few moments of the varsity Eagles in action on the field.

Filed under: Photography, Uncategorized on Monday, May 6th, 2013

The Enloe Varsity Soccer Team hosted Sanderson on October 16,2012. This was Senior Night for the Eagles.

The Enloe Eagles Celebrated Senior Night 2012 as they faced the Wildcats of Millbrook. Here are a few pictures from the last game of the 2012 season of Enloe Varsity Football:

The Enloe Cross Country Team visited Millbrook October 10, 2012 at Millbrook Exchange Park in Raleigh. It was a beautiful day for a run!! Here are a few shots of the Lady Eagles on their run through the park:

The Lady Eagles hosted Wakefield on August 23, 2012. Here are just a few pictures from a great afternoon of tennis.

LD CreativeMedia followed the Enloe Ladies Golf Team as they took on the Cap-8 conference at Lonnie Poole Golf Course at NC State University on September 25, 2012.

Surf’s Up in Kitty Hawk, NC

If you have landed on this blog post, the odds are pretty good that you know that I had planned to post one picture for each day of the year. Well, that was the plan…. Here we are in late July and it has been months since I last posted a photo. Time for a